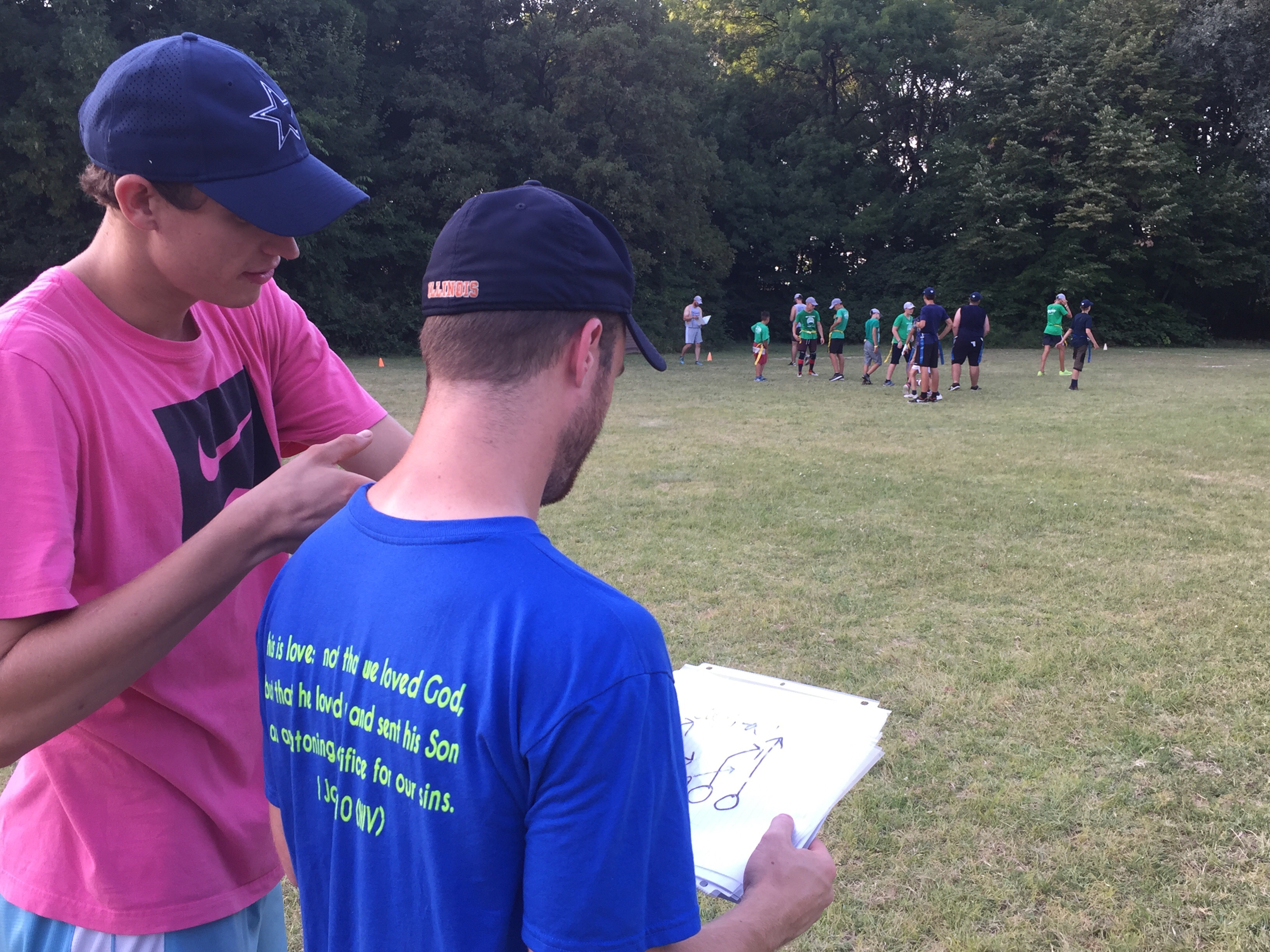 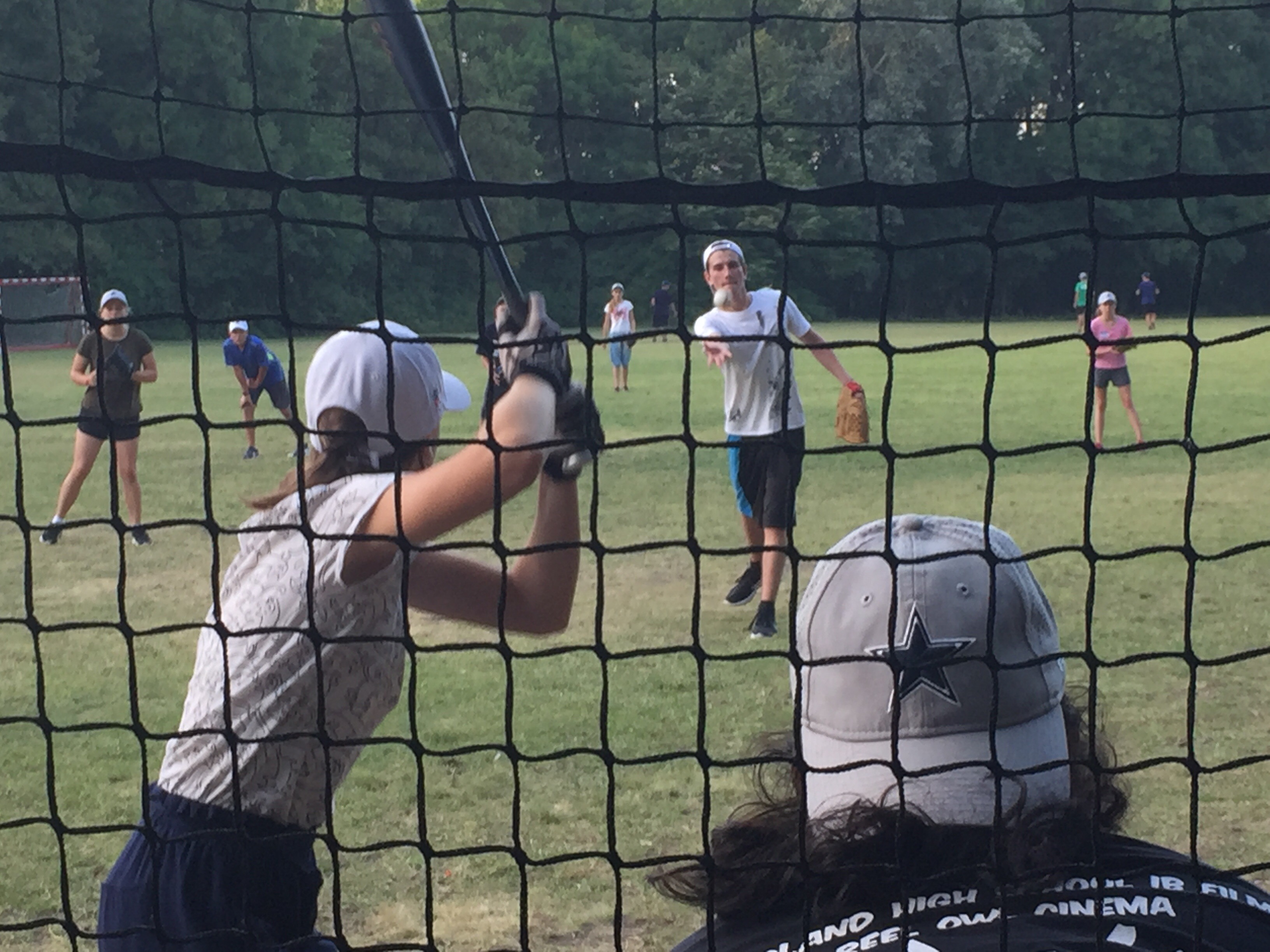 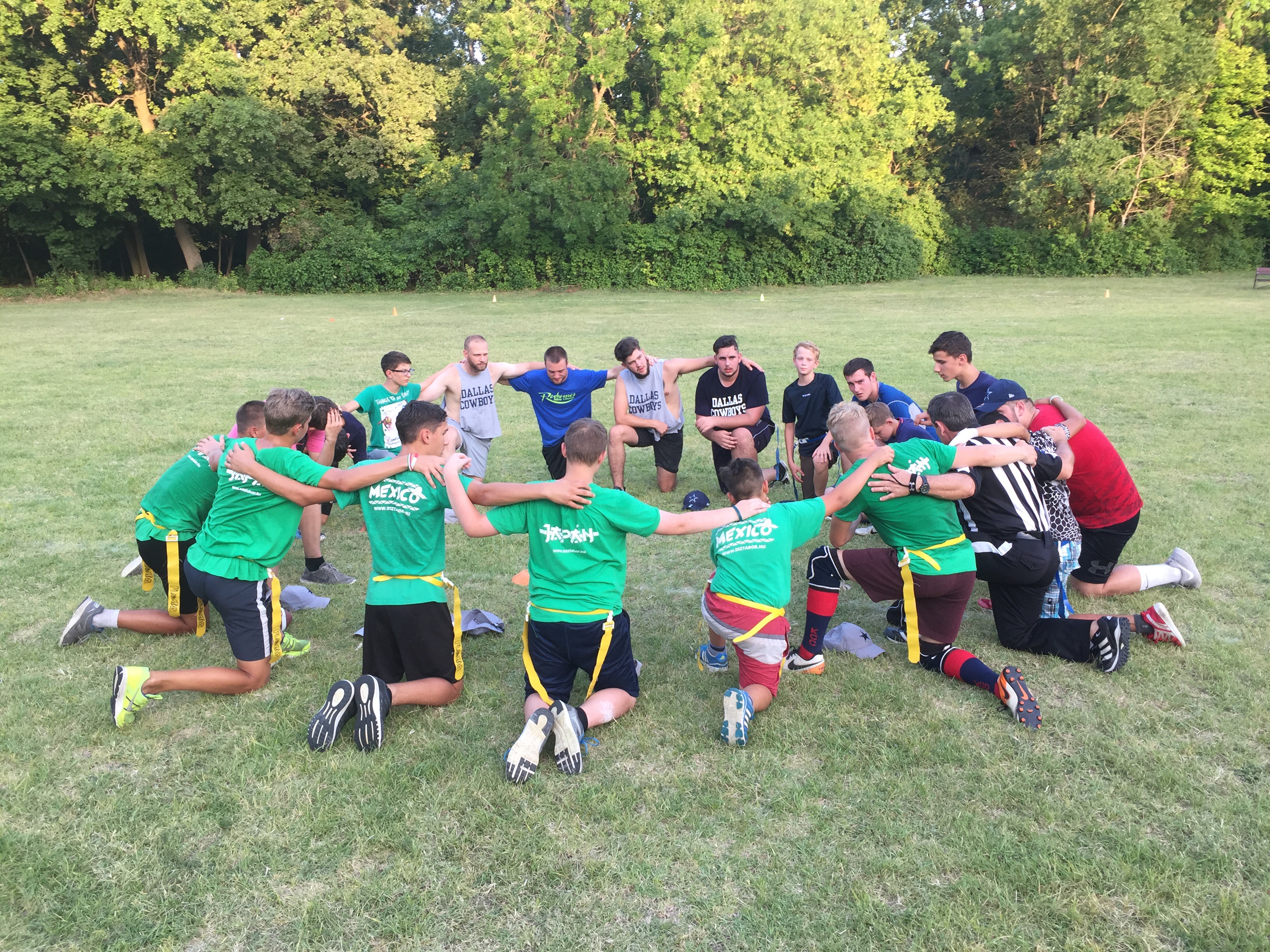 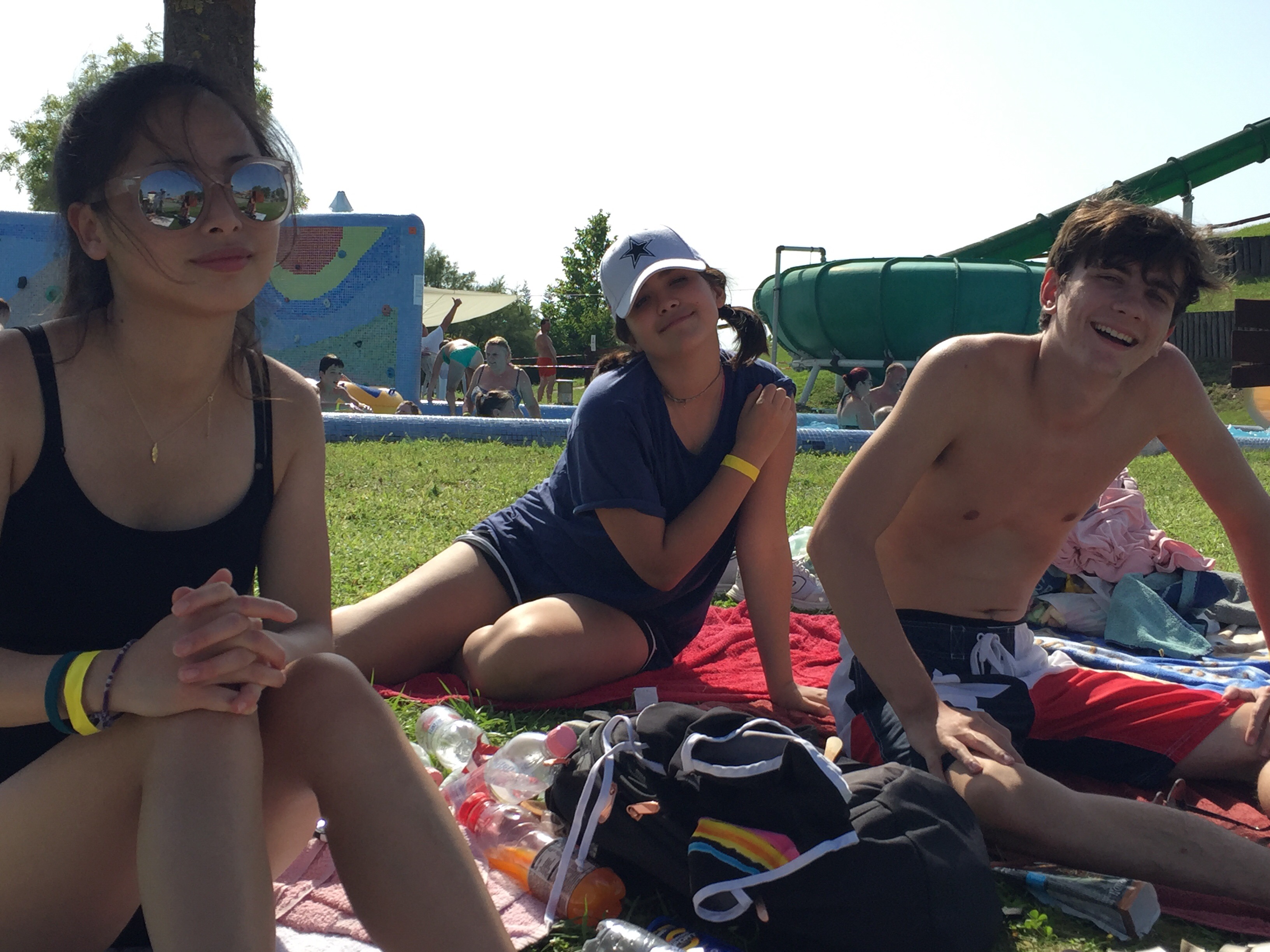 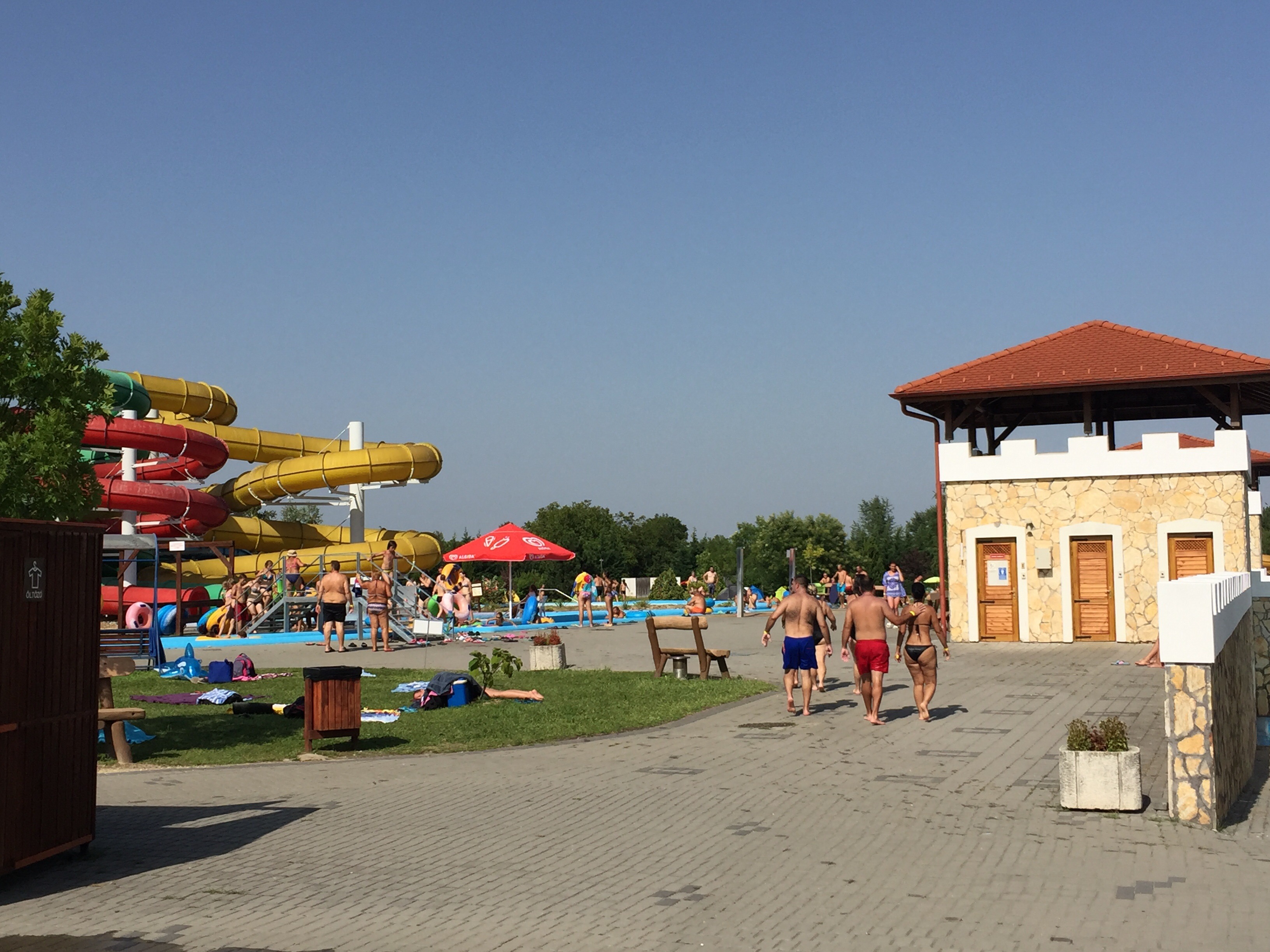 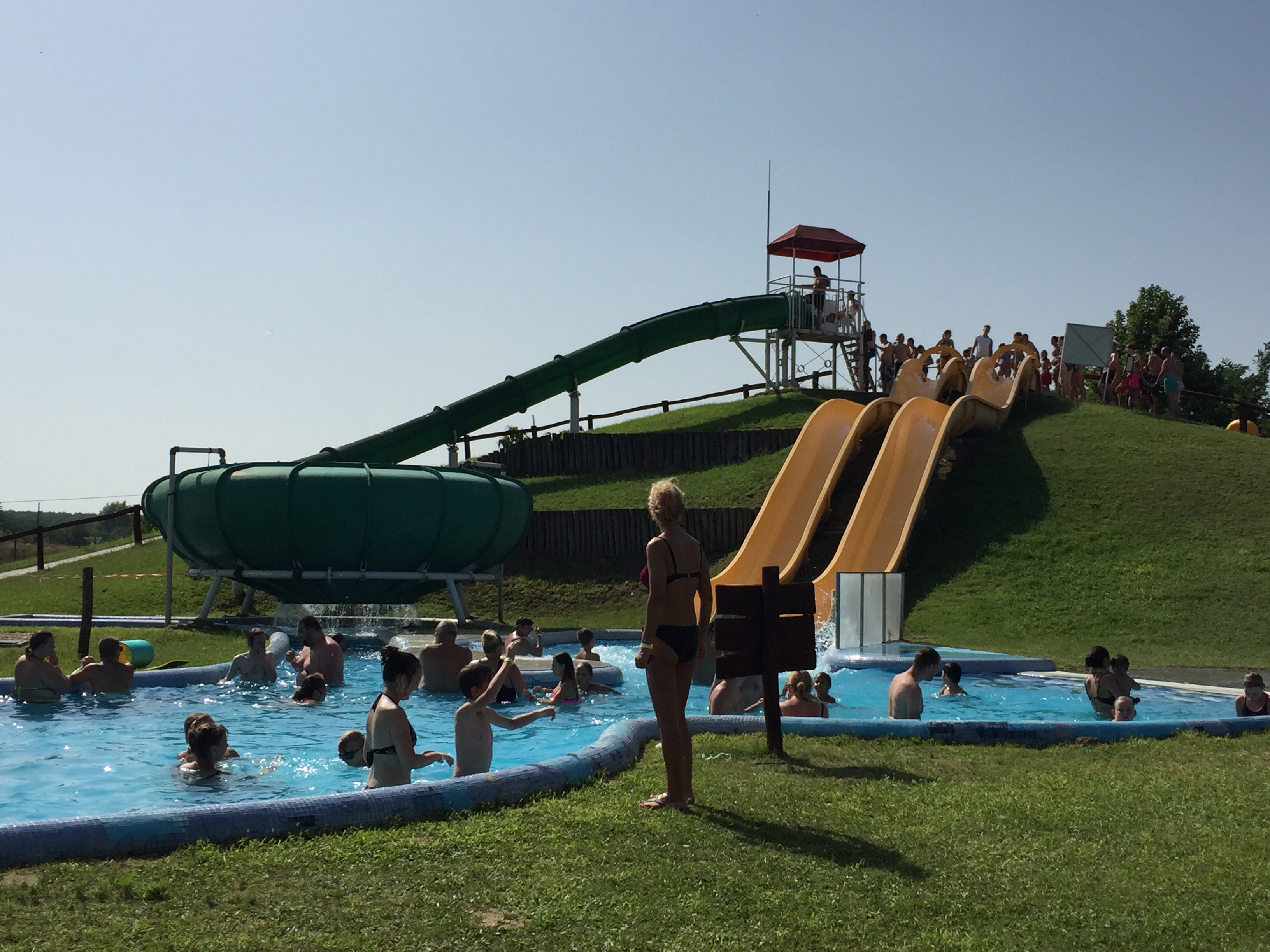 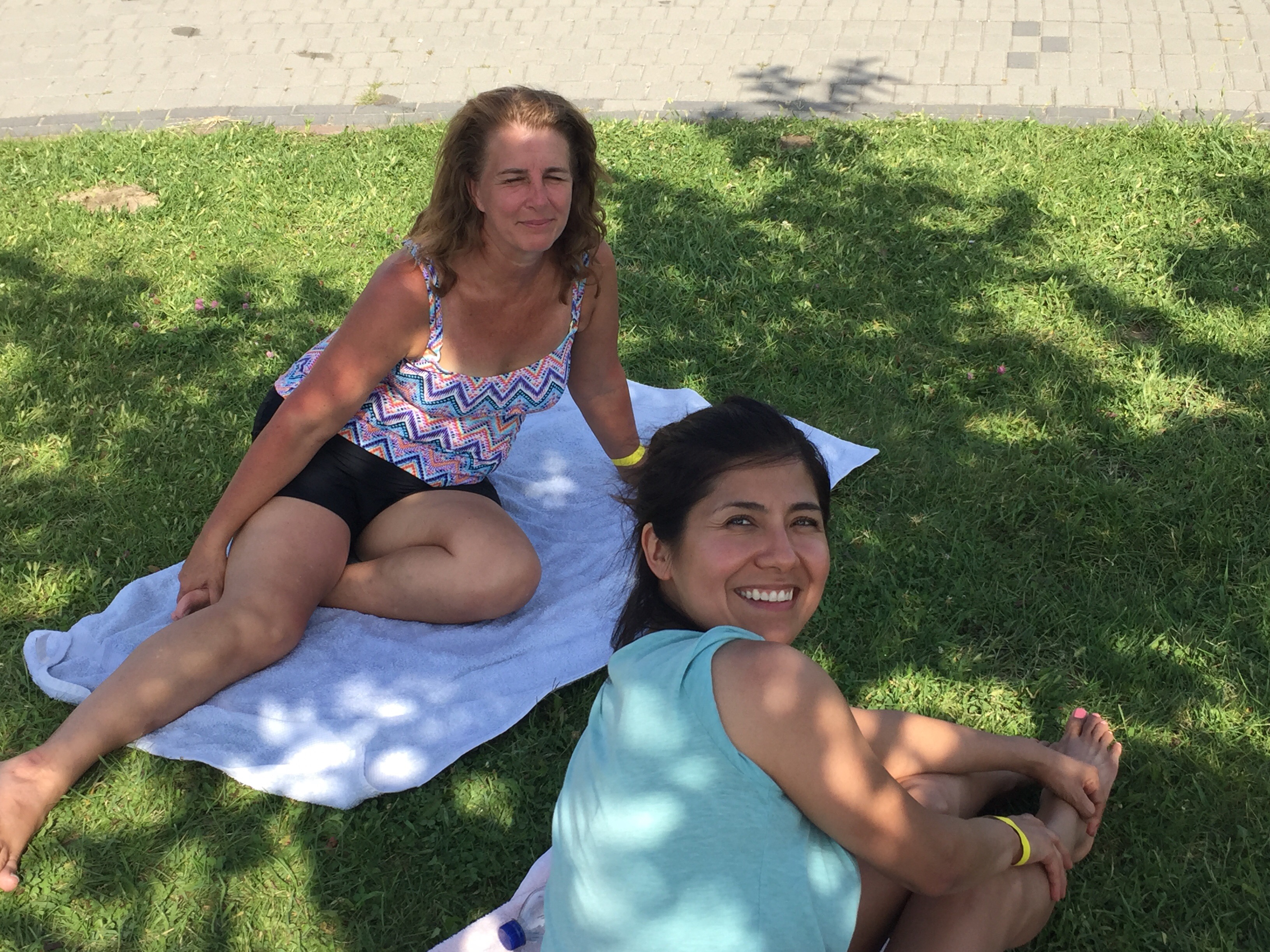 Today’s schedule was different from the usual camp routine. We all loaded up into buses and went to a waterpark for a few hours. During the bus ride, I had the opportunity to get to know one of our teammates more. It was an opportunity I had been hoping for. Nothing on this trip has been a coincidence—whether good or bad. God has a reason for everything and His sovereignty has been powerfully demonstrated through the obstacles we’ve faced so far. We spent the day in and out of the pools and slides, chilling in the shade/sun, getting sun burned and eating cold treats. Later in the evening, we all gathered back at camp for the bonfire where students got to share their testimonies with the rest of the camp. It was a very special time in which we got hear how God is changing the lives of the youth in Hungary.

There’s this supernatural joy and strength that comes from laughing, crying, praying, and talking with our brothers and sisters in Christ, even if we don’t always understand the language.

Tomorrow will be our final day with the campers. Please be in prayer for the following:

Thank you for your prayers and support!

A Day in English Class 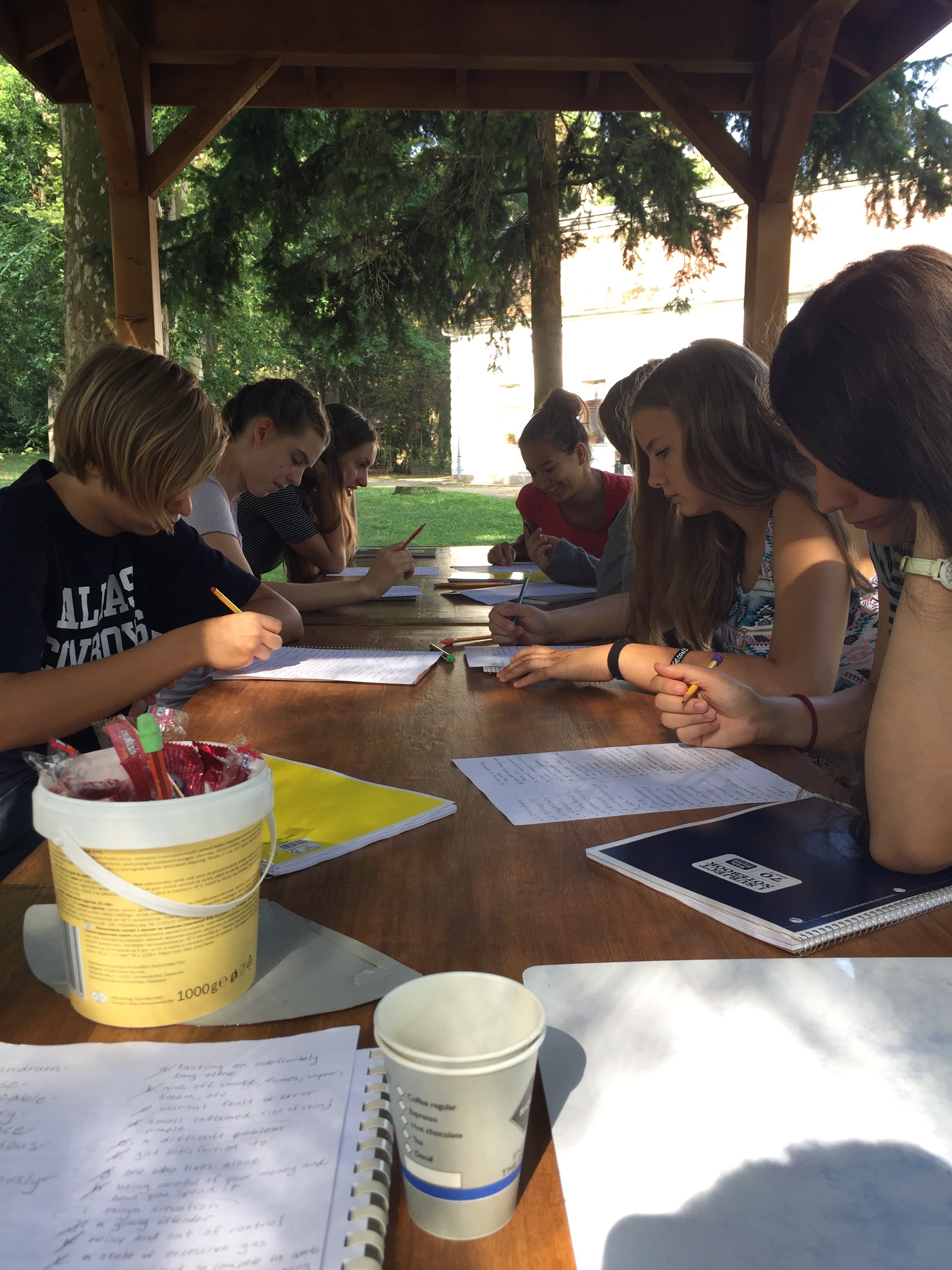 A fourth trip to Hungary cannot be compared to the first, second or third; each one having its own special trials and blessings, and yes they often go hand in hand. Lorena and I have had the honor and privilege to teach seven (six girls and one boy) advanced English students. It can often be a challenge to teach those who already have a good grasp of our language. We want the time that they spend with us to be well spent so we found a list of twenty three new words that they had not learned yet, one of them being, ‘conundrum.’ They were very grateful to add these new words to their vocabulary. Mission accomplished!

Speaking of missions we have had a couple of opportunities to share with our class what our mission is. Yes, to teach them English, but more importantly to share the gospel. Today we stressed the importance of not turning away from what they have heard and what they have been given. We asked them to consider their salvation and to trust in a God who loves them and died for them. Please pray that God would tear down any strongholds or obstacles that would keep them from trusting in Christ. We thank you for the prayers that have been prayed for our trip and mission to WOL Hungary.

I was so blessed to be a part of this mission trip to Hungary. Although we had a rocky start, you know the usual such as a three hour flight delay, being separated on different flights, and one of our group members tragically falling ill it has been amazing so far. Being in Hungary is absolutely surreal seeing how everything is so different in a good way. The architecture is so breathtaking it makes you feel as if you time traveled to a another time period with all the castles and rustic houses. This is actually my first time in Hungary and even out of the country in general. Each day I have the feeling of growing curiosity and childlike wonder for the culture and people. The campers and staff are so nice and welcoming here, its not the same comfort as being at home but they make it feel practically the same. The one thing I was scared about was the food but rest assured it was delicious, I want to steal all of their recipes and take them back to America. Sharing the word of God has been so empowering and helps me grow my faith every day. When people share their testimonies I feel the power of the holy spirit flowing through me and you can see it in the campers as well. I cannot wait to see what the rest of the week has in store and hope to continue to make life long memories. 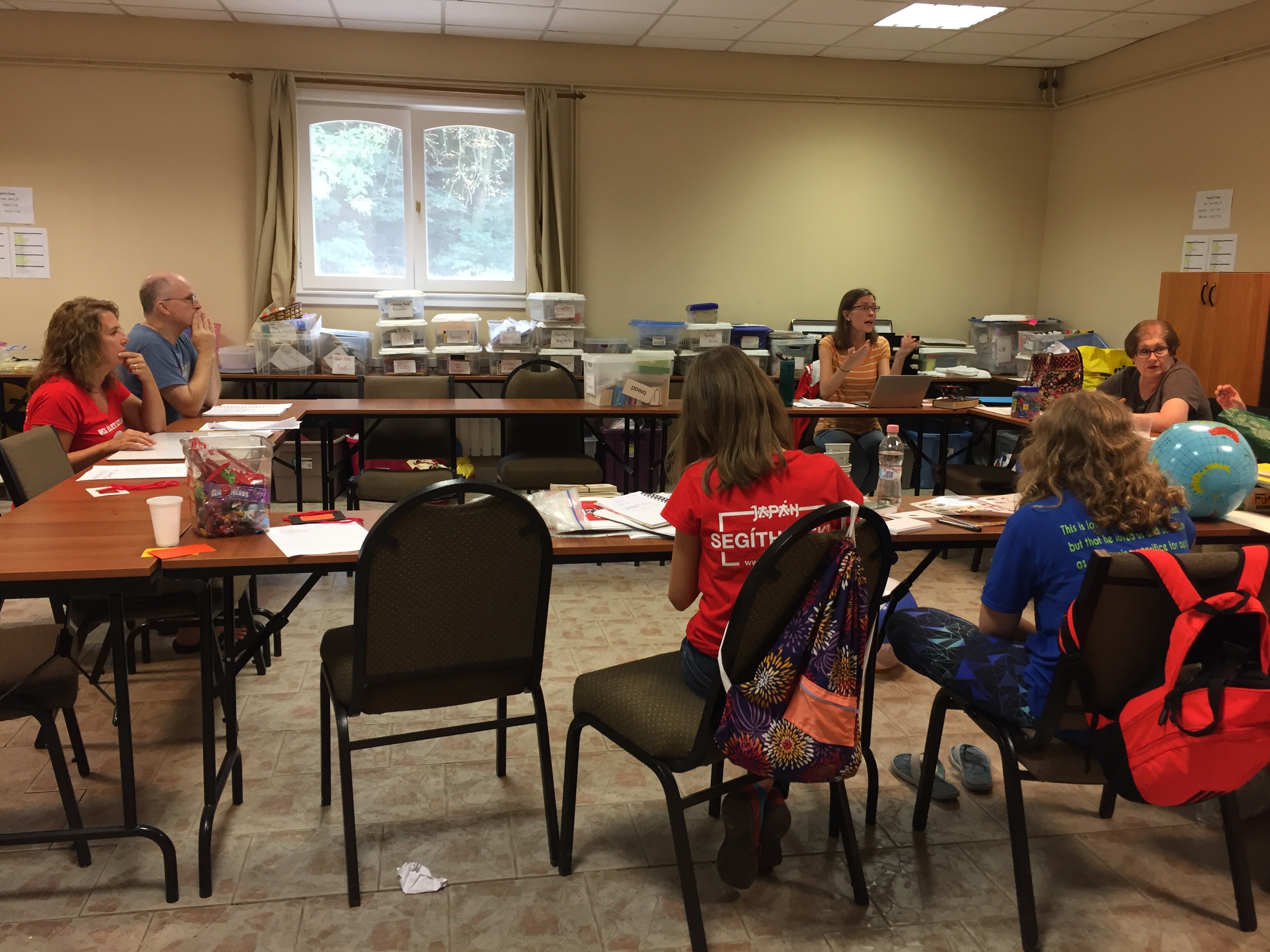 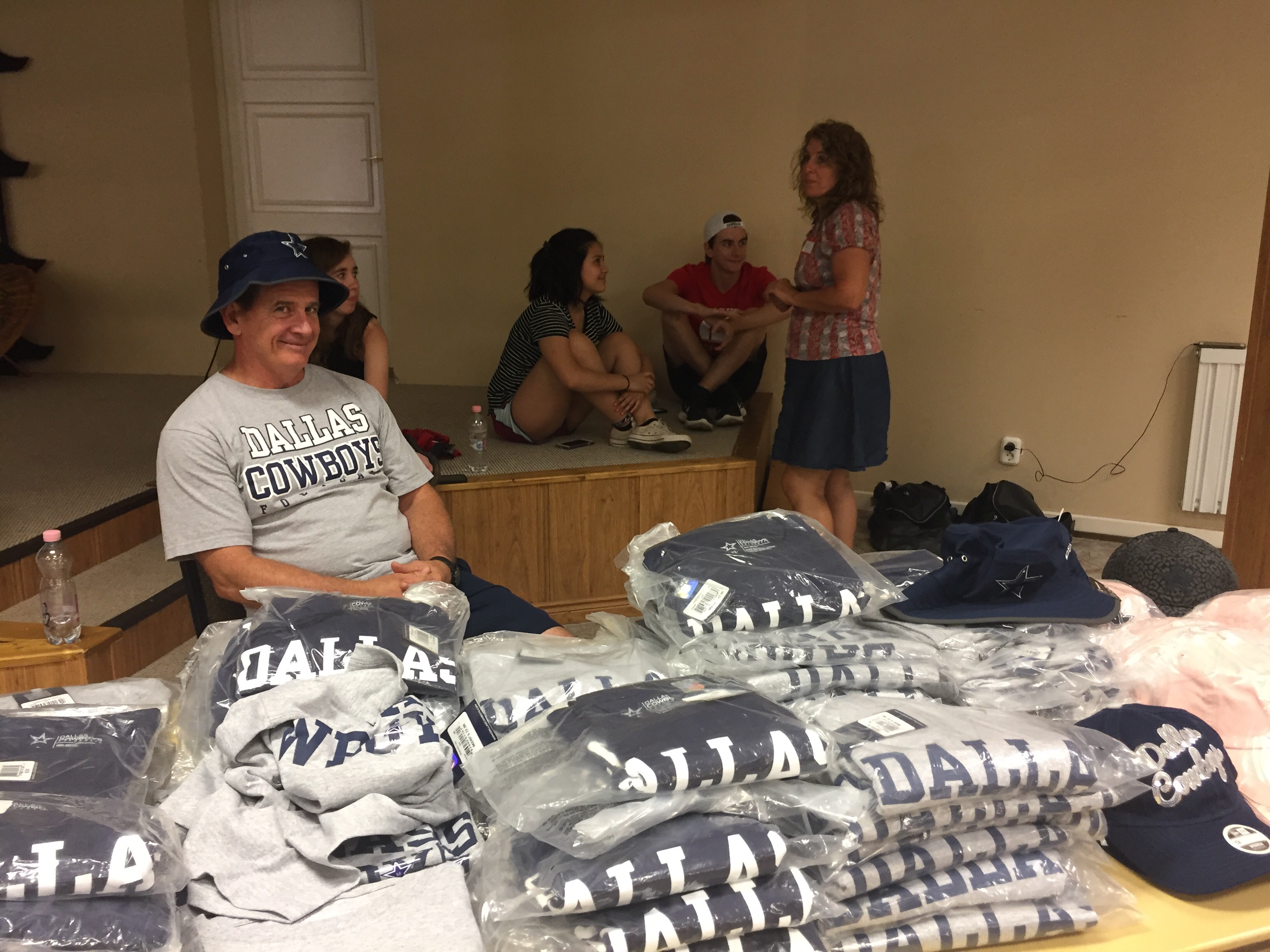 August 5: Fourteen of the twenty two team members bound for Hungary arrived safely at Word of Life Camp in the wee hours of morning. Eight of the twenty two stayed behind overnight in London. It was not such smooth sailing this year for Redeemer’s Hungary missions team.

After a couple hours of sitting on the plane bound for Heathrow airport, the captain announces that everyone must exit the plane so he can reboot it. After a successful attempt at fixing the problem, which proved to be an error on the computer end, we all arrived in London, only to be told that the initial delay also meant we could not all fly in together to Budapest.

After the group separated, eight of us waited at Heathrow for further instructions. One of the eight, Kenedi, suddenly collapsed and started convulsing. Thankfully her large backpack softened the fall and prevented her from hitting her head. The medics arrived quickly and we all prayed anxiously. Kenedi and Bert then proceeded to go to the hospital, while the rest of us went on to a hotel. Kenedi and her family have a clean medical record of any epilepsy and seizures, so pray that her health will be restored. Unfortunately, Kenedi will not be joining us at camp, and she is scheduled to fly back to Dallas on August 8. Bert will fly into Budapest a little later on the same day.

Please be in prayer for all of us as we believe that spiritual warfare is very much alive. Pray for Kenedi’s safe return and good health, for Bing’s family in the recent loss of Auntie Tess, and for the Lord’s continued protection over our group. We are so thankful for the hospitality of the Reyes family and for God’s sovereignty amidst all the chaos. We begin English and sports classes tomorrow morning. Pray that our fruit here will be extra bountiful, and that Satan would be intimidated by our relentless work for the Lord, despite the obstacles we’ve faced and may continue to face. God is good and we are so grateful for His protection and sovereignty. May He be glorified!